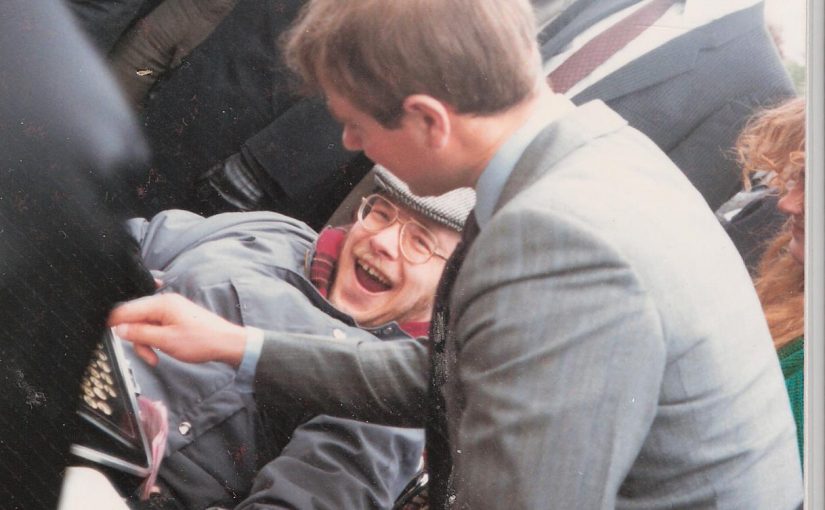 Adam was a member of Oxford Phab in its early days, and despite being Deaf – he communicated mainly via a Light Writer – and in a wheelchair, he was very sociable, finding friends wherever he went. He died, suddenly and much too young in 2007, but I am publishing this poem, which he wrote, in celebration of his memory and the times we spent chatting on Phab holidays. 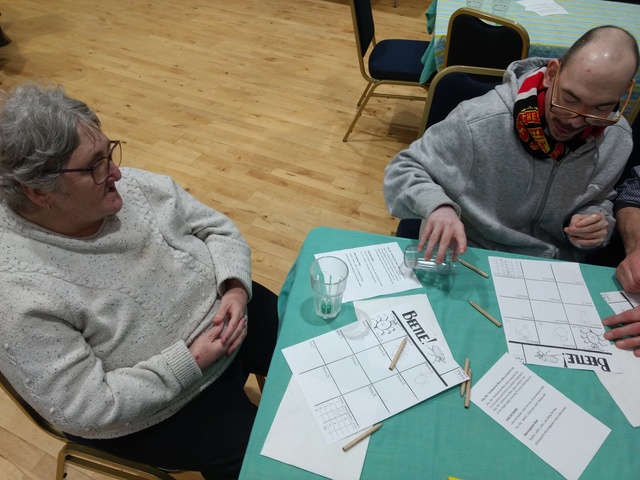 Like many other social activities the Wesley Memorial Church party, normally held in January, had not taken place since 2020, due to the Covid-19 pandemic. Having decided it was time to resume the tradition they kindly invited Phab.

The evening began with socialising and a quiz, involving identifying a range of people, each famous in their own way, ranging from John Wesley to Little Mix, from pictures posted on the walls of the John Wesley Room.

Once everyone had eaten their fill, and while a stalwart team in the kitchens laboured over the clearing up, we played several games of Beetle.

We had planned to start the New Year with a quiz in our first meeting of 2023. Unfortunately the Phab member to had kindly offered to organise the quiz was worried they might pass on a cold, for flu, and we felt it was best to postpone the quiz for later in the year. The make up of out membership keeps us aware of the pressures on the NHS and the chances of infecting the clinically extremely vulnerable.

As Christmas had occurred since we last met there was plenty to talk about, and we look forward to doing the quiz in the future.

Phab, as a National Organisation, has many amazing volunteers, and celebrates their contributions with a number of awards. One of these is the Paul Hope Award, and Helen, our chairperson for several years was nominated. We hoped she would be as successful as Simon and Mary,

The winners of the awards were announced at a teleconference, attended remotely by Phab members from all over the country, and by several of our members, including Helen, gathered at Wesley Memorial Church. During this we heard many of the exciting things Phab has been doing. Baroness Campbell gave an inspiring address, and said that she looked forward to meeting the winners in person at the House of Lords in a future reception.

Finally we heard the news that Helen had won !

For many years Oxford Phab has joined together for a traditional Christmas Dinner, to which we invite people who have been particularly supportive, or have some special connection with the club. Due to Covid we had not been able to do this since 2019, which made this one particularly special.

A team of volunteers peeled potatoes, parsnips, made stuffing, cooked the turkey joints, laid the tables and prepared the feast for the arrival of members and guests.

As the diners were arrived they gathered in the hall, and chatted and tackled the Christmas Quiz, with questions ranging from ‘Where was baby Jesus born ?’to ‘What is the most fragrant real Christmas tree ?’

We all moved into the John Wesley Room, and enjoyed a delicious meal, with turkey and all the trimmings, or a vegetarian pie, followed by home made Christmas pudding, or fruits and meringue (or both for those who still had room !)

We were also pleased to be joined by Kelly’s family, who had brought a cake, as this would have been her birthday,

We enjoyed Mamma Mia the musical so much when it came to Oxford in 2017 that as soon as we knew it was coming back in 2023 we booked it again at the New Theatre.

We were not disappointed – an evening full of familiar songs and well executed dance numbers left us humming the tunes as we loaded our minibus for the way home. 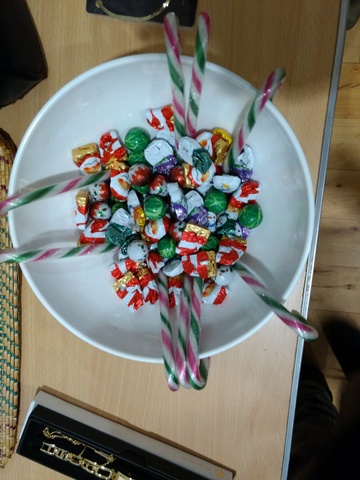 One of our Christmas traditions is that we play Bingo for chocolates and other small prizes, brought in by members, and enjoyed by other members. We have our own bingo machine, and re-usable bingo cards, which we mark off with old plastic bottle tops as counters. With a jolly caller, enthusiastic players and plenty of prizes we are all set for an evening of entertainment. 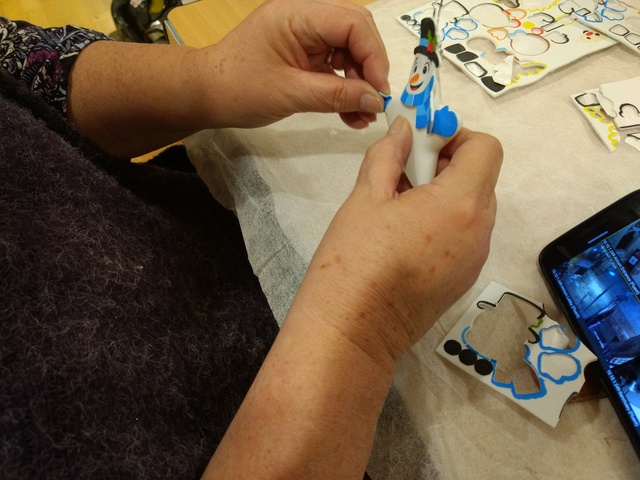 With Christmas approaching it is useful to be able to make little personal gifts for friends or family, or to decorate our homes with festive decorations.

We also added a little to the board of memory we had made at the Phab Southeast Fun Weekend, as not all our members had gone to that. 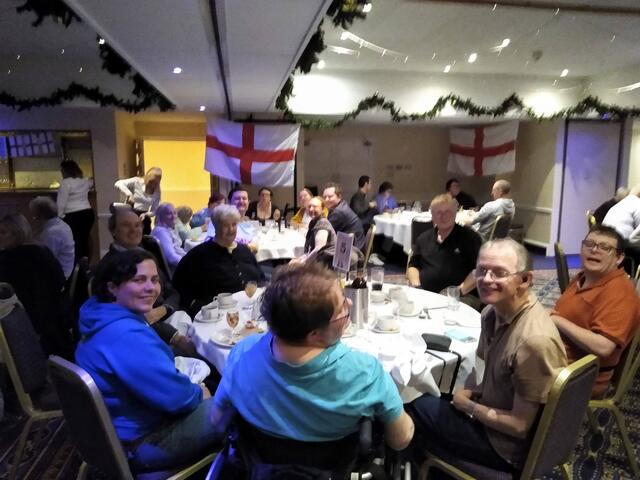 As on previous occasions the staff were very helpful with things like given out extra room key cards for some of our members who might need to give easy access to someone to let them in without the room occupant needing to come to the door.

Once again we used a combination of our minibus and two cars pick up members from various places and take them from Oxford to Chichester – the journey being complicated this time by the dual-carriageway Chichester bypass being closed – so all traffic was being routed through the town centre, and an alarming warning light on one of the cars which required an unscheduled stop to investigate. Despite this we all arrived safely at the hotel and were able to unpack and relax until it was time for the evening buffet meal. This was accompanied, and followed, by entertainment from DJ Lee. When everyone had eaten there was space for a disco and Karaoke.

The Boccia session was very popular, with some skilled and tactical players

There is nothing like an exciting and close fought match to work up a thirst for coffee in the bar afterwards to discuss the game.

After the activities there was plenty of time to socialise and prepare for the evening dinner.

For some members, Sunday morning was an opportunity for a lie-in and a late breakfast, but for some Phab members, from all over the South East, there was an act of worship. We reflected on how much the world had changed since we last gathered in 2019, the friends we had lost, the things we had gained, such as online meetings, and the things which have remained the same, such as our friendships within Phab.

Then we had a Sunday Lunch

Packed up the minibus, and went home – for a rest ! 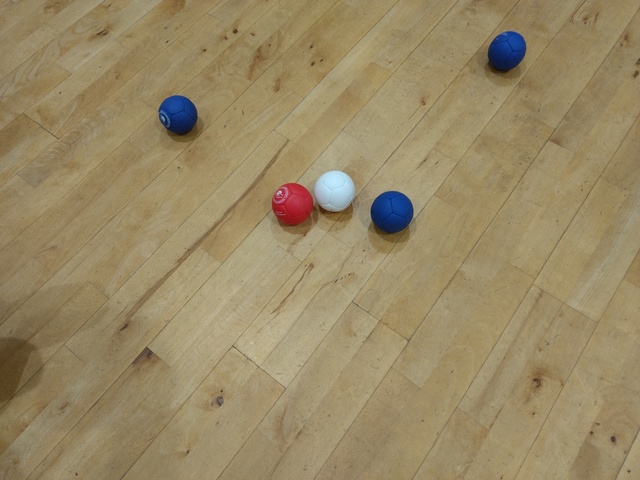 Oxford celebrates turning on its Christmas lights with an evening of activities at various venues, one of those being Wesley Memorial Church,

We started the evening in the Sanctuary – the main part of the church, where we chatted amongst ourselves and with church people and members of the public. We also ate Pizza, Stollen and Mince Pies. Amongst other activities one of church member was drawing caricatures of people, including some of our members.

We then moved through to the hall, and worked off some of the pizza with some hockey and boccia.