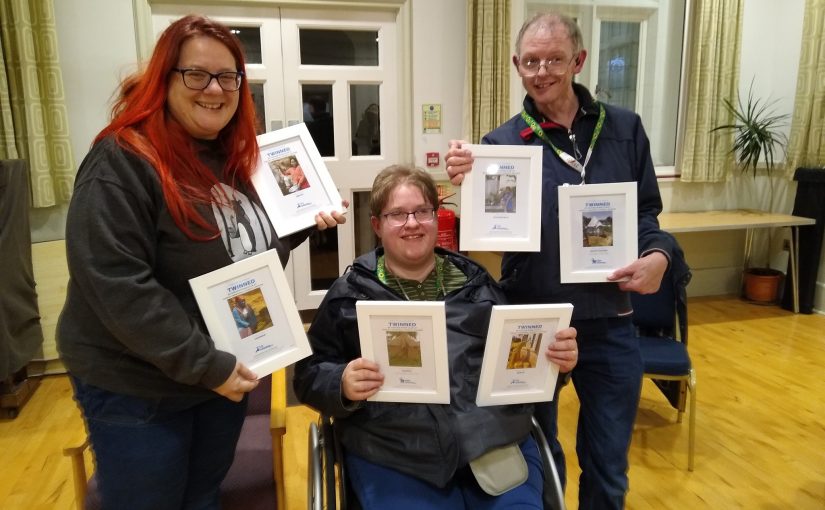 Having not met in our normal meeting place at Wesley Memorial Church in the centre for Oxford since March 2020, and having had our AGM last year via Zoom, it was great to be able to hold this year’s AGM as our first ever hybrid meeting.

This enabled some members who would otherwise have had to travel some distance, and those who are shielding to participate.

Each year at our Annual General Meeting we award the Roy Lewis Trophy to someone who has inspired us by their actions and contribution to our club. The past year has been difficult for so many people but our members chose to award trophies this year to three people who have stayed strong and positive in adversity. Their bravery through sadness and difficulty has been an inspiration to us all. We send our love to Trisha, Melissa and Katherine.

We also had physical confirmation of the results of our sponsored walk to raise money for Toilet Twinning, and were able to show off the certificates.

We raised enough to twin both accessible toilets and four taps at the church.

As well as the usual AGM business of elections, accounts etc it was an opportunity for members to see the new church atrium, with its automatic doors.

It has been a long wait for Wesley Memorial Open Doors building project to reach this stage, but the results are beautiful. They are also much more accessible. At the far end of the space between the church on the left and the John Wesley Room on the right, before the atrium was built, roughly where the wooden desk is, there was the door into the building. It was installed before accessibility was an issue, and so opened outwards, as fire escape doors should do, and had a door closer to prevent it staying open, to conserve energy. It was also at the top of quite a short steep slope, which has been converted into the gentle unnoticeable slope of the atrium. The combination of these factors meant that entering the premises in a wheelchair, even for someone who was normally independent, required three people, one entering, one holding the door and one pushing.

All the fundraising Oxford Phab did to help support the Open Doors project has been most worthwhile. 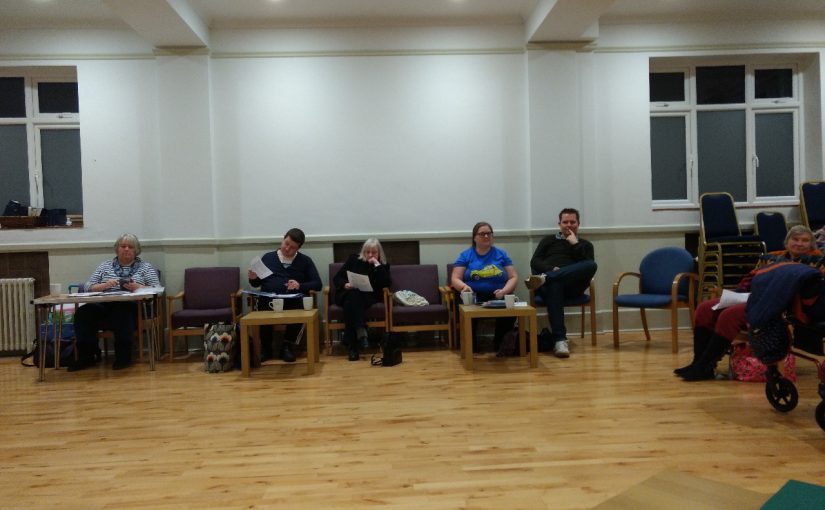 Once again it was time to look back at what we had done during the year, and look forward to next year, in our Annual General Meeting.
Our chairman, Helen, summed up the year in her report

Another year has passed, and I can’t believe I am already writing another annual report.

Friday nights filled with fun activities.  We have had sports nights doing Boccia, hockey and Zumba.  Food nights including pancakes and noodle night, and of course our very own Christmas dinner which was cooked by member and a few friends of Phab.  This was really successful as it was a lot more inclusive and we had a lot more room to move around and mingle, which was lovely.  We have had a number of arts and crafts nights, had quiz nights, film nights, bingo nights, beetle and we even had a Connect 4 competition night.  We have also been invited to many events in the Wesley Memorial Church including the folk festival and the new years party as well as helping raise money for the Open Doors project by helping sell refreshments.

Out and about we had a meal at Oxy, went to a Halloween disco with our friends at Banbury Phab.  We went to see Mamma Mia, Jack and the Beanstalk, The Band at the theatre, we took part in two Zumba Fundraisers, went to Donnington Social Club, have been bowling a few times, went to a barbecue at the home of Simon and Sarah.  We went to the annual garden party fundraiser this summer.

Last year some of our members went to the South East Phab Fun Weekend back in November last year.  We also went back to Avon Tyrell in the New Forest in July.  Members got to have a go at many activities including archery and climbing.  We cooked marshmallows on an outdoor fire.  This year we were also welcomed by the crew of The Dolphin boat in Poole Harbour who took us on a trip around the harbour.

The Roy Lewis Memorial Prize last year was awarded to Darren and Maria for their wedding celebrations.

We have lots of fun activites planned for Christmas and have already booked to see a pantomime early next year (oh yes we have!)

Once again we really do appreciated all the continued support from our friends and families and everyone else who continues to make Phab fab.

We had  the usual financial reports, election of Officers and the Committee etc. After these routine matters we were very pleased to have Robin, who has organised many quiz nights for us, and Penny, who has been been a valued and helpful member for many years as this year’s recpients of the Roy Lewis Award. 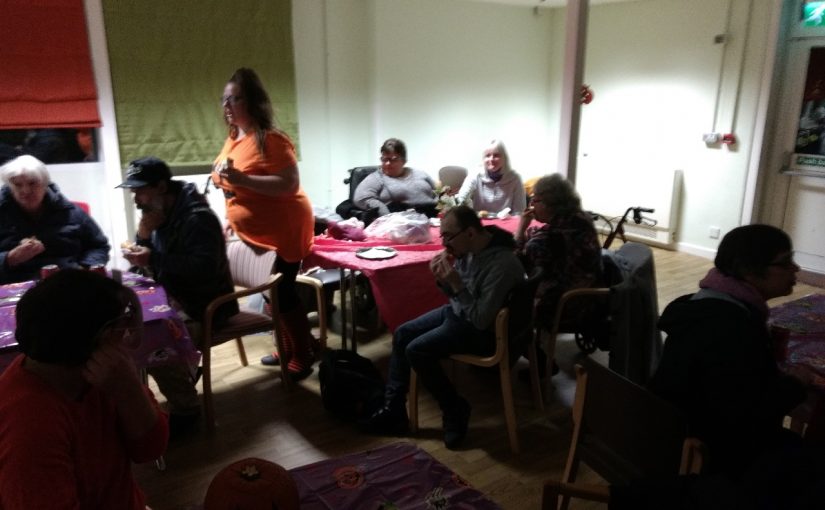 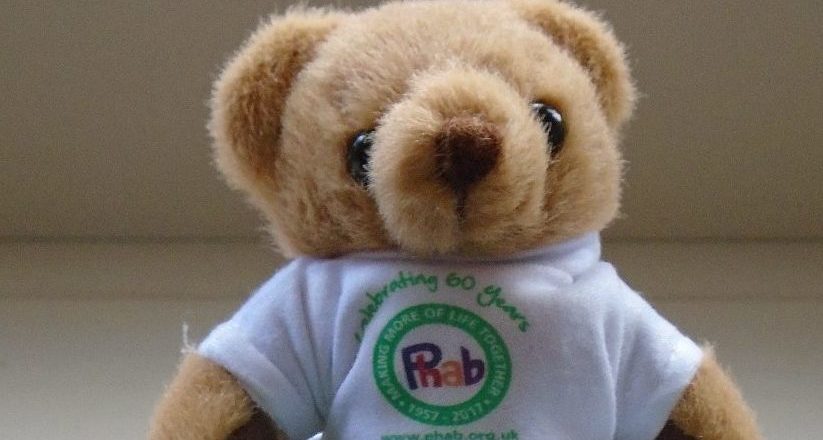 Phab, the national charity, which Oxford Phab is affiliated to, celebrated its 60th birthday this year.
Part of the celebration was a Tea Party at Avon Tyrrell, particularly significant as Phab started in 1957, following a National Association of Youth Clubs camp where one of the participants said he wanted “Opportunity, not pity”. The marquee, decorated for a 60th party, ready for tea. John Corless, OBE, giving a speech, and review of Phab, past and present. He presented awards to people who had been working with Phab for many years,
It was a great opportunity to get together with Phab people from all over the country and have a reminder of the things that other clubs are doing.
Also being back in Avon Tyrrell gave us a chance to look at the water activities which we did not have a chance to do on our holiday earlier this year, or last year, or in 2015.

We decorated cards and bags with a Christmas theme. . More craft activities – powered by chocolates, which were the prize for our Team Building entry on the Phab South East Weekend. Treasurer’s report at the AGM Lee receiving The Roy Lewis Award. for all the discos he has run for us.
Dot was unable to attend but wss awarded the Roy Lewis Award in absentia,Â  for organising transport for many years.

An article about Mary’s reception of the Paul Hope Award has been published in the Oxford Mail at http://www.oxfordmail.co.uk/news/14021580.It___s_absolutely_Phab_as_social_club_founder_is_awarded_for_her_work/
It is great to see news of what we are doing reaching a wider community. 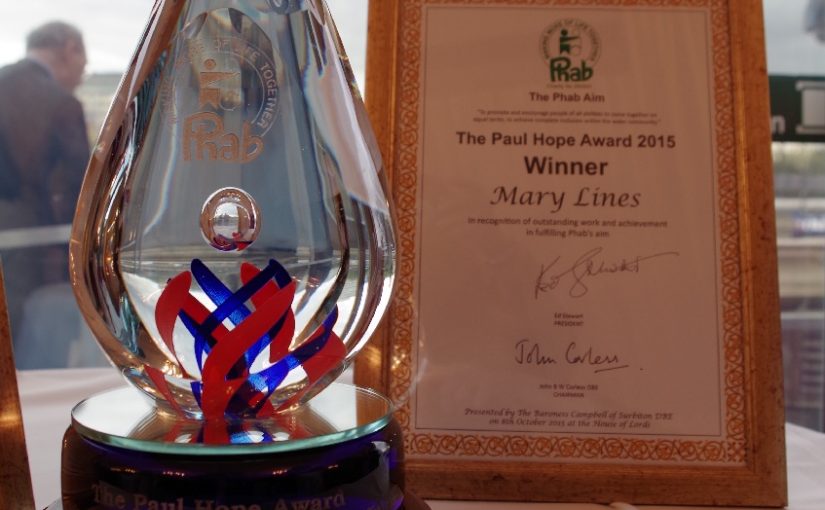 At a ceremony at the House of Lords Mary was awarded the Paul Hope Award for all  her contributions to Oxford Phab, Phab South East and Phab Nationally over many years. Here is Mary with Jackie of Unity 70. For the first time the award was shared between these two  very deserving candidates. 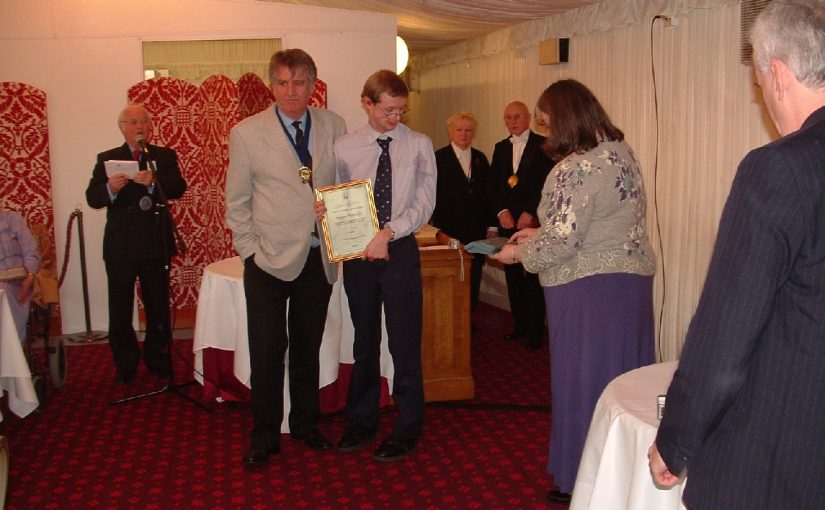 In recognition of his work in furthering the aims of PHAB over many years Simon Purbrick was presented with the Paul Hope Award at a ceremony conducted at the House of Lords on February 9th 2006.

About the Paul Hope Award

Presented annually in memory of the late Paul Hope, the
award recognises outstanding contributions to furthering
the aims of PHAB. Paul Hope was the Club Services and
Development Officer at PHAB for many years.

Simon has been a member of Oxford Phab for many years, and has been

Simon is also a member of Abingdon PHAB, where he also makes a valuable
contribution.

In recognition of her contributions to Phab,  Kelly was nominated for the Louis Goldberg Award, and was presented with a certificate a ceremony conducted at the House of Lords on February 9th 2006.

About the Louis Goldberg Award

The Louis Goldberg Award is awarded in memory of the late Louis Goldberg, a devoted supporter of Phab, and is presented each year to a Phab volunteer aged 25 or under.

Kelly has been a member of Oxford Phab since 2001, and in that time she has made friends, not only within our club, but throughout the wider Phab.  She participates enthusiastically in events and holidays and is also a good ambassador for Phab in the wider community. Her whole family are involved, even coming with us to Eurodisney. She has even persuaded her brother to do several, very much appreciated Discos for us. 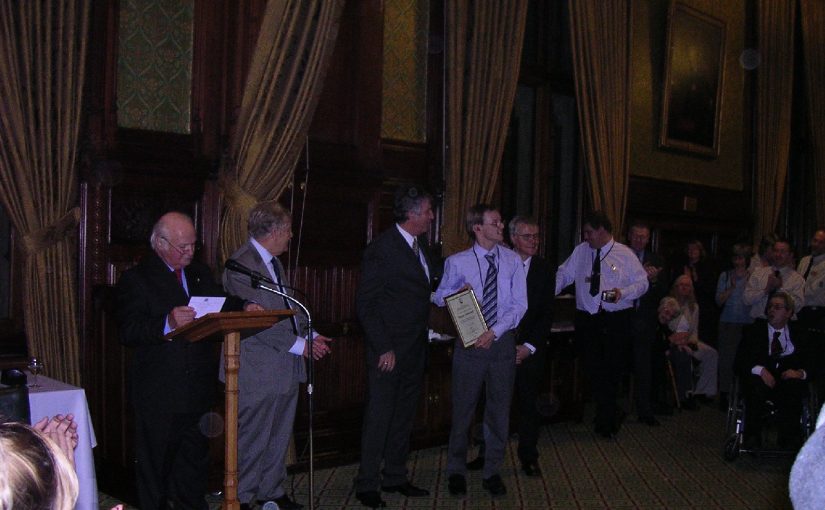