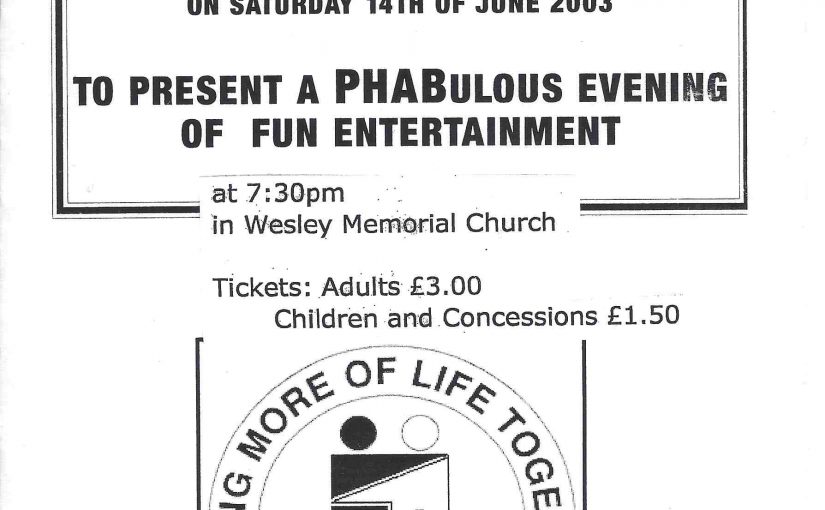 After many nights of rehearsals, we produced our Phab concert on Saturday 14th June. The Compère’s script gives a flavour of the variety of acts and talents within the club and it’s friends.

Ladies and Gentlemen, Oxford Phab and Friends are delighted to welcome you to our Fabulous evening of fun entertainment.

You have seen the on the television, you have bought the CD’s (some of you) = Now here they are in person – the Fabulous Spice Girls.

Some of the club members who would have liked to have taken part could not be here tonight, Catherine has recorded a couple of songs for us. – The first is ‘Killing me Softly’, accompanied by Liz on the harmonica, the second is ‘Our Father in Heaven’ which she wrote herself. Catherine is in Germany at her cousin’s confirmation.

Tom is also away – doing something even more exciting than being in a Phab concert and here he is to tell us about it.

Catherine’s video contained a BSL signed explanation that she was not here, followed by her playing and singing two songs.

I am sure we all wish Tom smooth sailing, and Catherine would like me to remind you that you can buy a tape of her songs with proceeds to charity.

And now I am sure you have never seen such delightful sisters as Mary and Penny.

Mary and Penny, both dressed in cream shirts and blue skirts sang ‘Sisters‘, accompanied by Stephen on the piano.

You have heard Stephen accompany Mary and Penny but now you have a chance to hear him play Chopin’s Fantasia Impromptu in C sharp minor.

Stephen played the Grand Piano in the church for us.

Now our very own Television Star, taking time off from her appearances in Judgement Day, Test the Nation, Love Match and Nobody Likes a Smartass – the Amazing Helen

Helen sang ‘Greatest Love of All‘ – which with its themes of the importance of dignity and self worth struck a chord with us.

I’m glad I don’t have to follow that, but somebody has to – Please give a warm welcome to Hugo and his accordion.

Hugo played the accordion, a virtuoso performance, which was followed by chicken jokes from Anna, Mary and John, as a filler while Kathryn, Liz, Anna, Wendy, Kathryn, Vicky, Mary, Di and Penny came on stage, dressed as chickens and sang ‘We are poultry’ and danced to the tune of ‘We are Family‘

Hey little hen, when, when, when will you lay me and egg for my tea – and talking of tea – Tea and coffee are now served in the Hall

We have a twenty minute interval.

After refreshments we, and our audience, returned to the church

Welcome back – introducing our second half we have Danny as Gareth Gates, and his Glamorous Dancers.

Danny took on the role of Gareth Gates in Spirit in the Sky, while the glamorous dancers were Liz, Katherine, Kathryn, Penny and Anna, transformed from poultry to glamour by means of the Wesley Memorial glitzy skirts, and joined by Kelly.

For Wesley Memorial regulars Jim needs no introduction – so he’s not getting one !

Jim sang, accompanying himself on the guitar, but I do not have a note of the songs he sang.

Thank you Jim, and now – Fleeter of Foot that Fred Astaire and Ginger Rogers – Katherine and Liz – take it away girls !

Katherine and Liz, dressed in black trousers, silver waistcoats and sparkly hats performed a tap dance routine which has been choreographed by Katherine.

Now for a change of pace – One of my favourite people – Penny – singing ‘My Favourite Things‘.

Thank you, Penny. Now accompanied by the versatile Hugo, this time playing the piano – Kathryn

I do not have a note of what Kathryn sang,

She was followed by Tom, our treasurer and member of the Wesley Memorial choir, singing Close Every Door to Me, from Joseph and the Amazing Technicolour Dreamcoat.

Next came a slightly adapted version of ‘Jolly Holiday‘, particularly appropriate for our club as we have had many Jolly Holidays with Mary.

Mary then introduced our final song – ‘I wish I knew how it would feel to be free/One‘ which we then signed and sang, bringing the evening to a close.