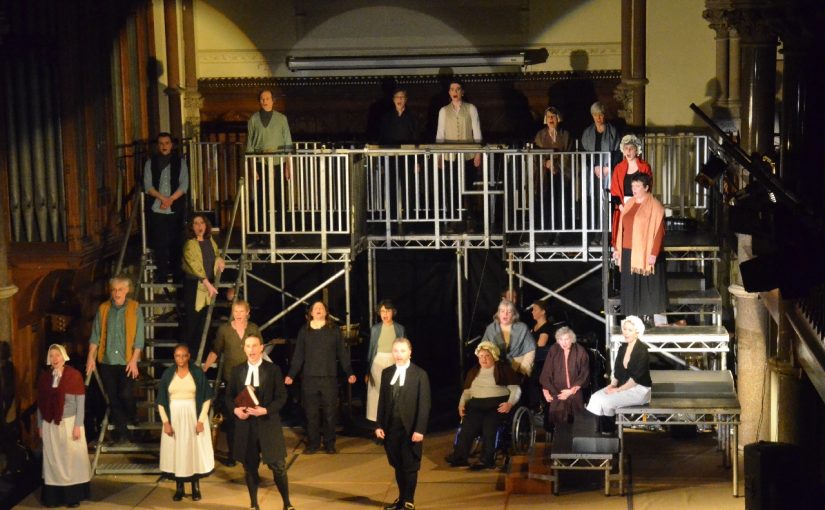 Some Oxford Phab members performed in the Musical “Amazing Love“, while others came to watch. All those who took part, and hopefully those who watched, found it inspiring and uplifting.
It was written by Jack Godfrey, a member of Wesley Memorial Church, and who came to Phab from time to time – and tells the story of John and Charles Wesley.  This might not sound like the most promising material for a musical, but the Wesleys had an exciting life and Amazing Love features a fire and a storm at sea, both accompanied by appropriate special effects, as well as scenes at Oxford University and the Colony of Georgia. We also learnt the less widely know “Tale of Jeremiah‘s Wife”. In the background are Mary, Sarah, Karen and John from Oxford Phab looking on as John Wesley talks to Sophie Hopkey. Here John (on the upper level), Mary and Sarah are joining in the finale.
Up in the gallery Simon was running a Followspot to illuminate principle characters, and helped with the setting up and taking down of the lighting rig.

This video was shot during the setting up of part of the Fire! scene. The production version of the scene used more fire effect lighting systems and a smoke machine.
Rehearsing for the musical and thinking about some related issues led to the article Amazing Love, Demographics and Mass migrations on my blog.